Edwin Battistella has written for American Speech, Politico, the Huffington Post, Choice, the Vocabula Review, the Chronicle of Higher Education, the Library Journal, Academe, Society, the Oregonian and Oregon Humanities.  Here are a few highlights.

“Insulting the President Is a Tradition as Old as the Republic,” The Daily Beast, April 23, 2020.

“How U.S. Presidents Have Tried to Use Legal Action to Stop People From Insulting Them,” TIME, April 1, 2020.

Oregon and the Film Industry.  The Oregon Encyclopedia. http://www.oregonencyclopedia.org/entry/view/oregon_and_the_film_industry/ 2013. 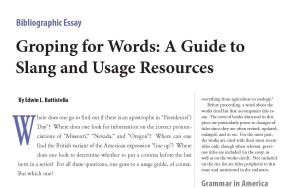 “The Folk Art of Language” Vocabula Review, March 2008, www.vocabula.com. [also in Vocabula Bound, vol 2, a collection of essays and poems to be published by Vocabula Books, 2008.]

“The Puzzle of Propriety: What etiquette books reveal about the dubious nature of manners” Oregon Humanities, Fall/Winter 2008, 23-26.